Christi Harris Statement During an ordinary trip through the grocery store my attention was drawn to the way in which the screaming tags and signs all simultaneously tried to grab my attention. At first I didn't even notice how many lurid signs there were. The curious thing was that I was still always able to recognize the brand or product that I wanted to buy due to its packaging.

I found this very interesting and began to formally and conceptually examine the space. There were yawing, gaping spaces filled with carefully stacked soda, Mac 'n' Cheese, smoked sausage sticks and crackers. The mere quantity and choices available at grocery stores are especially American and specifically suburban. The space sprawls, hugging the ground and comes surrounded by a football stadium sized parking lot. The product choices come in ludicrous abundance in a space that could house hundreds of people, and the space comes surrounded by a wasteland of concrete and asphalt that provides an individual parking spot for the entire cities' population. The abundance of products in such a specifically suburban space was a great contrast to the ethnic grocery stores and New York City groceries I have visited where everything is terrifically condensed into tiny spaces.

I began these works by setting up on site in the store. I became aware of the constant shift in the environment because of the workers and the shoppers. The changes that occurred minute by minute were not even noticeable to most customers. The smallest changes would wreck my compositions. It became necessary to photograph the sites in order to maintain continuity in my paintings

The resulting paintings allude to these thoughts and concerns, providing a still-frame of a certain moment. They also provide a formal and emotional examination of this particular space at this particular Hy-Vee in Ames Iowa. The seeming loneliness of minor human characters are amplified by the color and geometry of the space. Many of the paintings contain no humans at all. This emphasizes the way we pass through a space in a moment of time, taking our surroundings for granted. 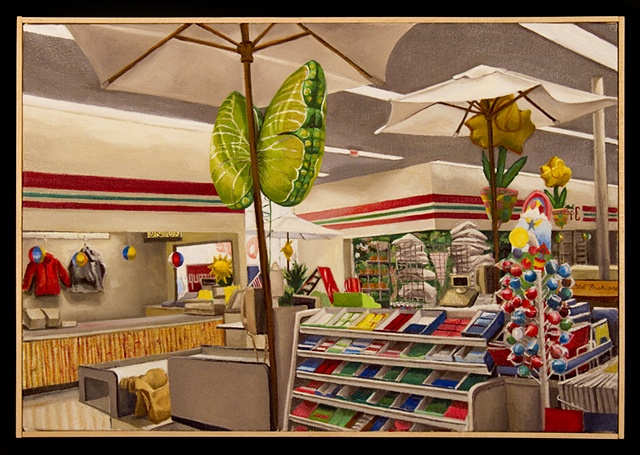 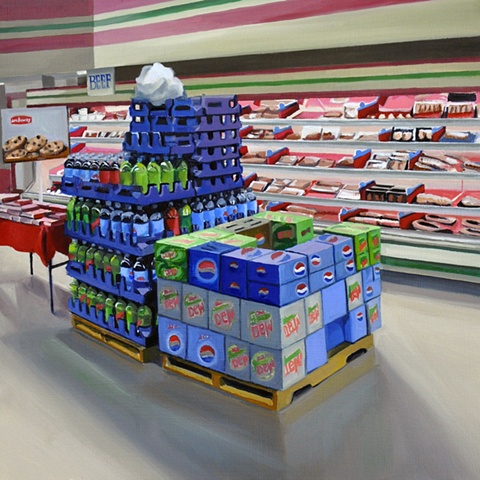 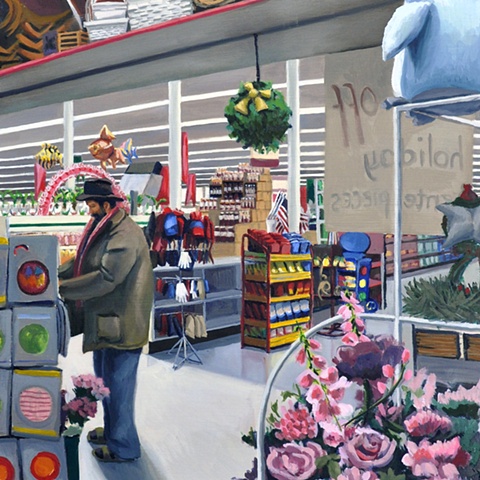 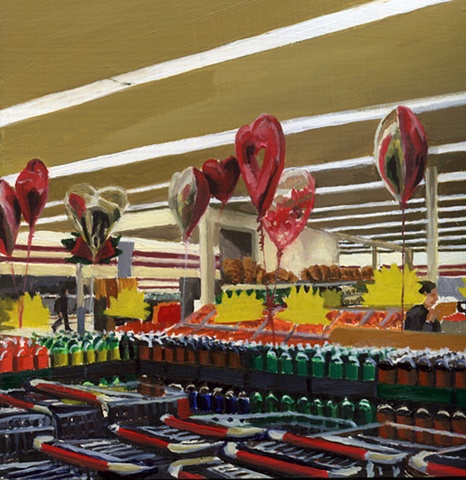 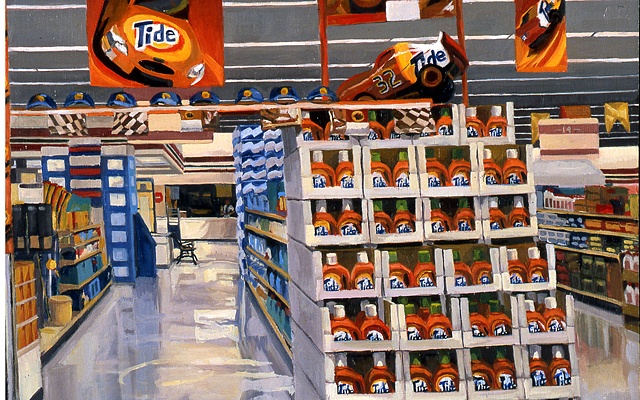 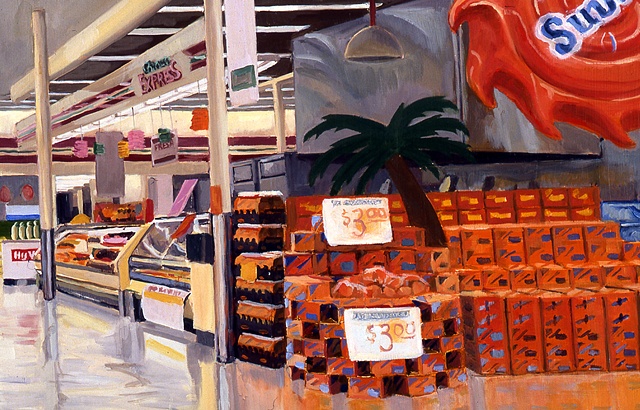 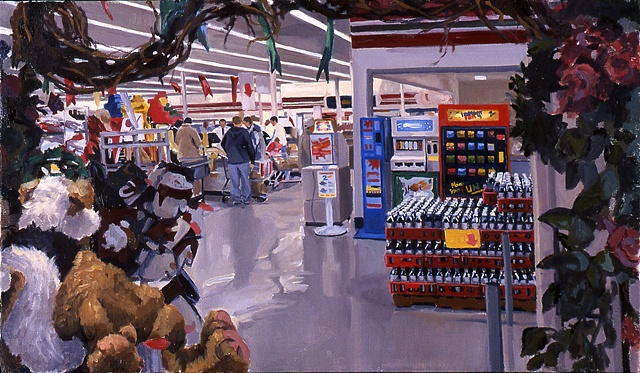 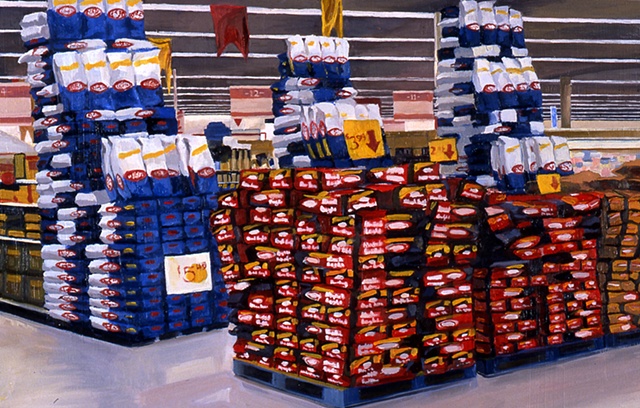 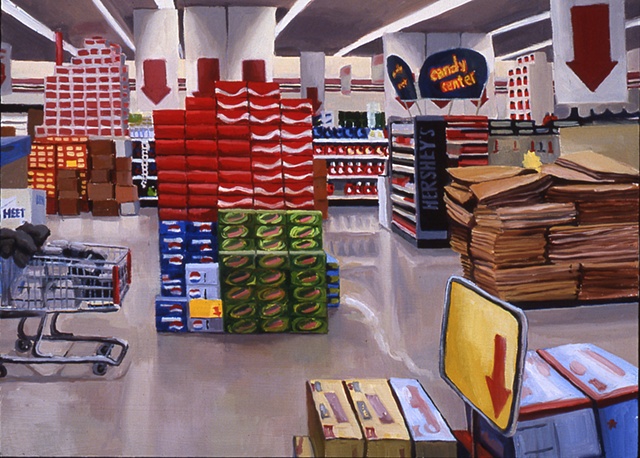 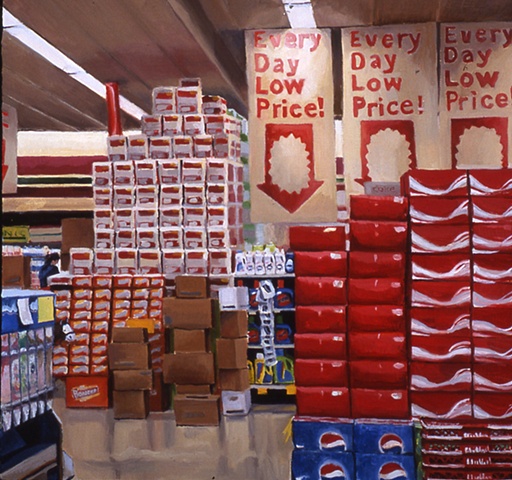 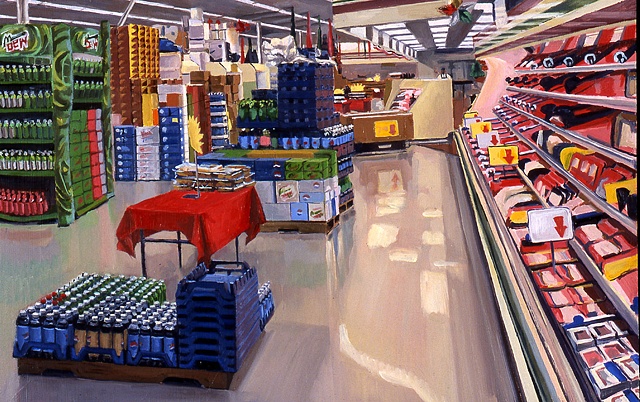 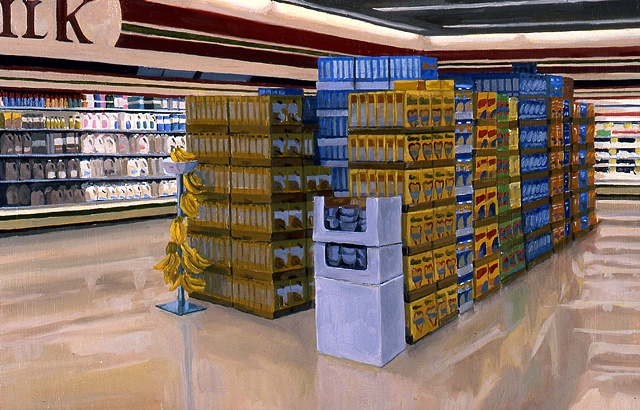 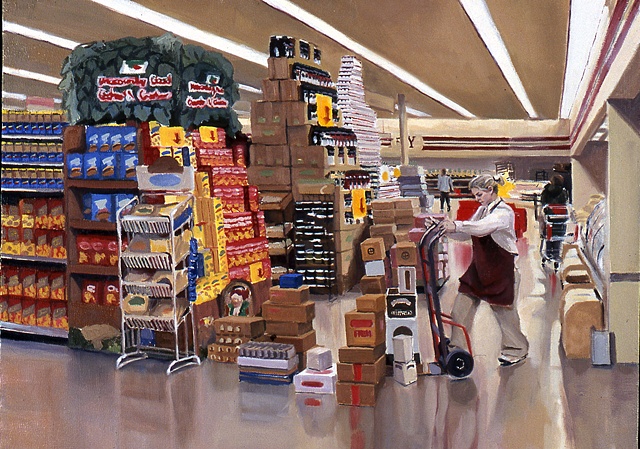 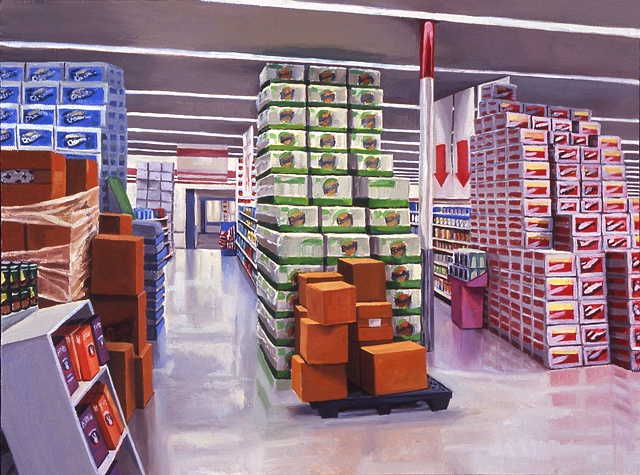 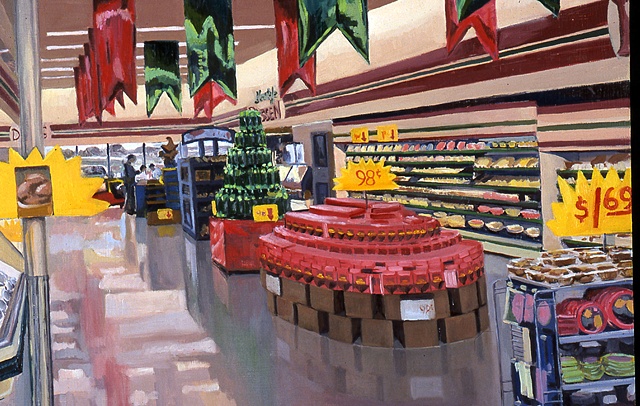 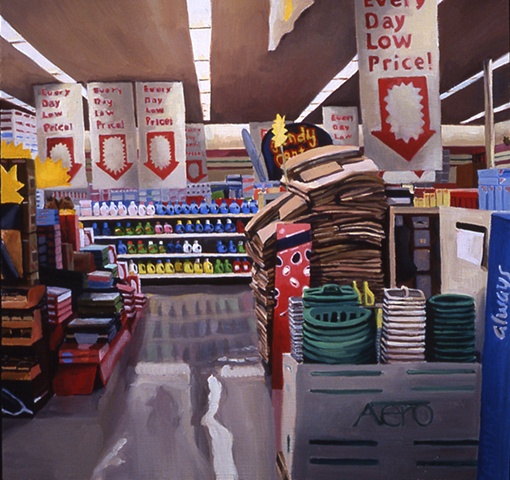 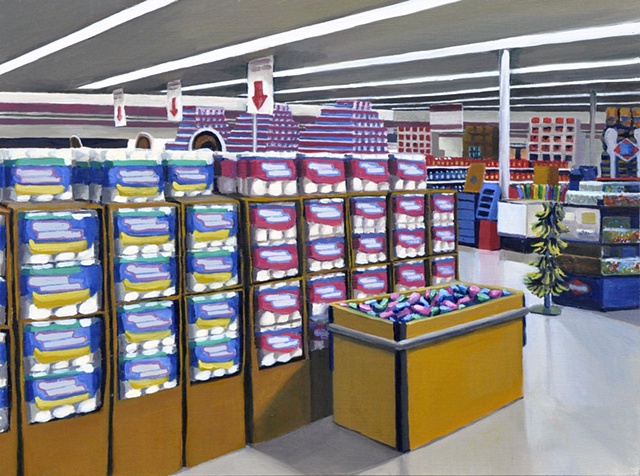 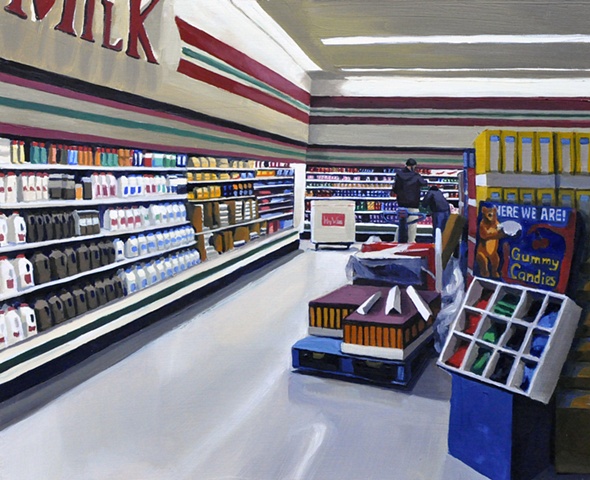 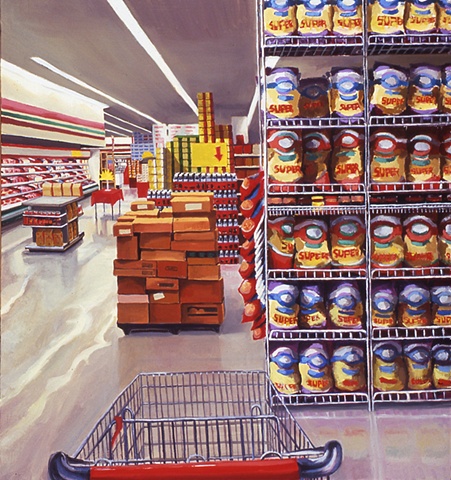 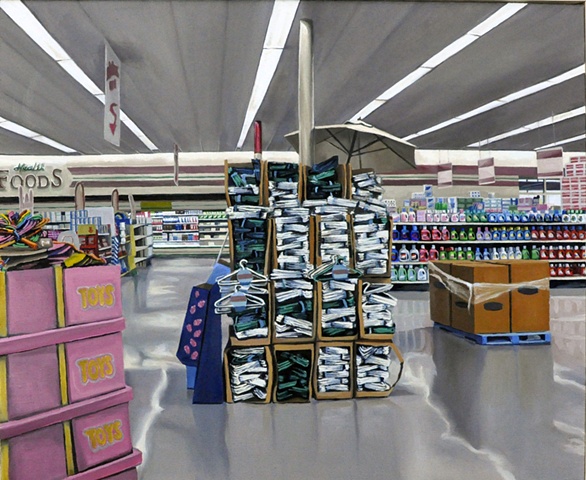 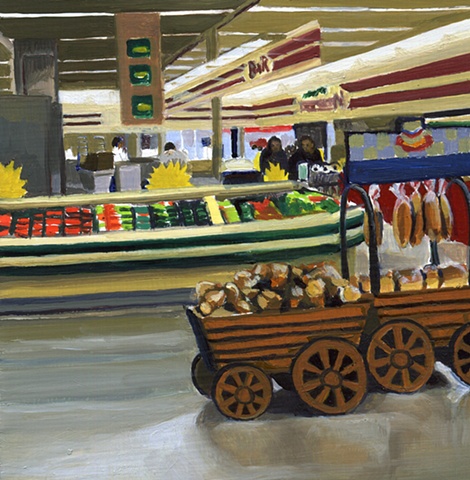 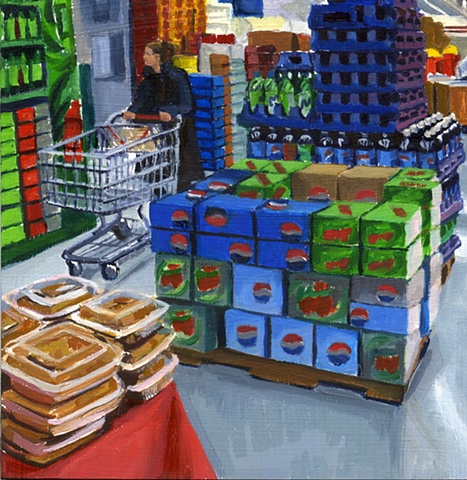 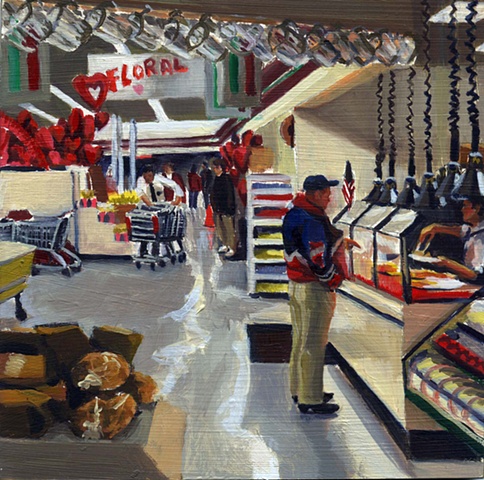 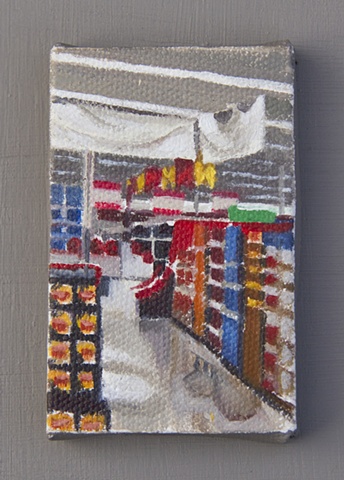 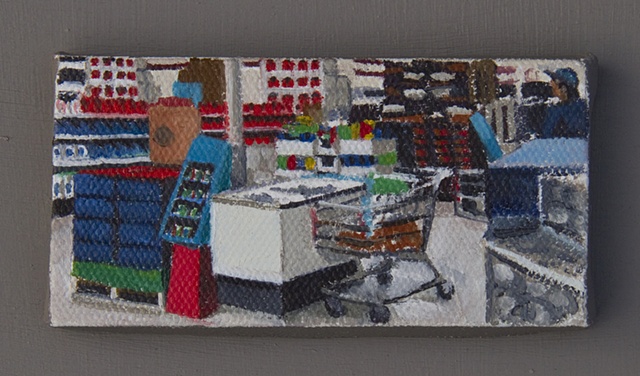 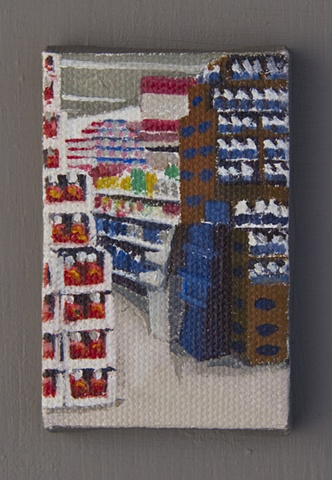